BIG DATA AT THE QUAYSIDE

Seaports are looking to automated technology in the battle to attract larger and larger cargo ships. But by no means is this the only challenge facing an industry undergoing a process of major upheaval.

Until midway through the 20th century, workers would unload sacks, crates and barrels from cargo ships with their bare hands. Millions of dockworkers completed this backbreaking work across the world’s ports. In modern terminals, this profession has completely died out. Once a ship docks, enormous overhead cranes manoeuvre across its cargo and unload the containers. They are loaded onto self-driving vehicles, which transport them to the next station following the radio signals emitted by transponders installed on the ground. This way, the cargo reaches its first destination at the dockyard without any human intervention whatsoever.

In modern ports, scenes such as these are commonplace. Around 90 per cent of global trade is transported by sea; the vast majority in containers, which can be loaded quickly and systematically. “An increasing number of processes are being automated,” says Carsten Eckert, terminal planner at consulting firm Hamburg Port Consulting (HPC), Germany. The same applies throughout port logistics. According to a study by McKinsey in 2017, the number of ports around the world with at least some degree of automation is around 40. Investments may be expensive, but experts believe that successfully implemented automation can reduce ports’ operating costs by up to 55 per cent, while boosting productivity by up to 35 per cent. New high-capacity mobile network technology such as 5G also has a role to play here. In the port of Xiamen, a Chinese industrial consortium demonstrated this spring how autonomous vehicles can be fed with data and controlled using the latest mobile network standards. A letter of intent from the companies describes how the future of our ports will be dominated by 5G operating in conjunction with machine vision, decentralized data processing (edge computing) and artificial intelligence.

The benefits of automation are not only on display at the quay, they also provide assistance in container warehouses. Here, IT systems ensure that containers ready for pick-up are positioned as far up in the stack as possible. Overhead cranes are in non-stop operation, picking out containers and re-sorting them. Only the systems’ electronic control units can see a method to the madness.

Keeping track of things is also one of the greatest challenges in modern ports. Large cargo ships carrying 20,000 standard containers come into dock; in a few years’ time, ships carrying 30,000 containers could be the norm. The more containers loaded onto the ship, the more time required at the port terminal – a major cost factor for shipping companies. Ports are investing in new technology to streamline their processes and attract ships moving forward. “Some terminal operators invested in automation early on,” says Dr. Jean-Paul Rodrigue, Professor of Transport Geography at Hofstra University in New York.

One example is the high-tech container terminal in the Altenwerder district of Hamburg, Germany, which was opened already in 2002. However, ports like this did not only intend to keep pace with the competition. “They also used their high-tech systems as a showpiece for their ports,” comments Rodrigue, who has been monitoring port digitalization for many years.

The professor has noted that more and more port operators have been playing catch-up recently. “One of the reasons for this is that the technology is more reliable and costs less.” For some ports, digital solutions are the only opportunity to expand their business. Case in point: Los Angeles. It is the largest port in the US, handing 9.5 million standard containers per year. However, its location – penned in by the city on one side and the hills on the other – makes physical expansion impossible. This means that increasingly larger cargo ships have to be processed and handled more and more quickly. Last year, Los Angeles adopted autonomous transporter vehicles to solve this issue.

The port of Singapore, on the other hand, is pursuing a conventional growth strategy. It handles 37 million containers per year making it the second-largest port in the world after Shanghai. The port operator intends to build a global trading hub handling 65 million containers per year by 2040 using land reclaimed from the sea. Everything will be automated – from trans- porter vehicles and cranes to warehouses and administration.

Modern data technology is not just used to control systems on quays, in warehouses and in administrative centres; it can also be deployed to simplify harbour tug maintenance. Sensors monitor the vibrations of key drive components. Certified maintenance specialists work in harmony with the software, which compares current and past data and spots any patterns that may point to a potential issue. The component in  question can be replaced before it fails, without risking the tug being out of action and significant costs being incurred as a result.

The ability to systematically evaluate large volumes of data allows ship arrival times to be predicted with an even greater degree of precision. This ensures more efficient operations and optimizes the steps involved from unloading to onward transport. Algorithms are used to assess data on ship size, load, currents and weather. This capability will only get better over the coming years.

NO SHIPPING WITHOUT DREDGING

Smart technology is not enough to make ports futureproof. The more containers loaded onto a cargo ship, the deeper its draught. But dredging out new access routes is expensive. The ongoing project to deepen and widen the river Elbe in Germany is set to cost some €780 million. In other cases, structures are what hinder large ships’ progress – such as at the Köhlbrand Bridge in Hamburg. This bridge spans a key access point to the port, and some ships can only pass underneath it when the tide is out. Larger ships cannot pass at all and are forced to resort to other port terminals.

The trend towards ships of increasing size is also being met by protests. The port of Houston, Texas, for instance, has imposed a limit on the size of ships docking there. But with competition only becoming fiercer, not all port operators can afford to put up such resistance – especially in Europe. “Around a dozen modern ports along the Northern Range, a group of ports spread across 500 kilometres of coastline in northern Germany and northern France, are fighting to attract customers,” says Carsten Eckert. Rotterdam is aiming to cement its position as Europe’s largest container port. For newcomers such as JadeWeserPort in Wilhelmshaven, which opened in 2012, it is difficult to gain a foothold. JadeWeserPort is Germany’s only deepwater port and offers capacity for 2.7 million standard containers per year. According to industry figures, 640,000 containers were handled in 2019, not enough for a profitable port. 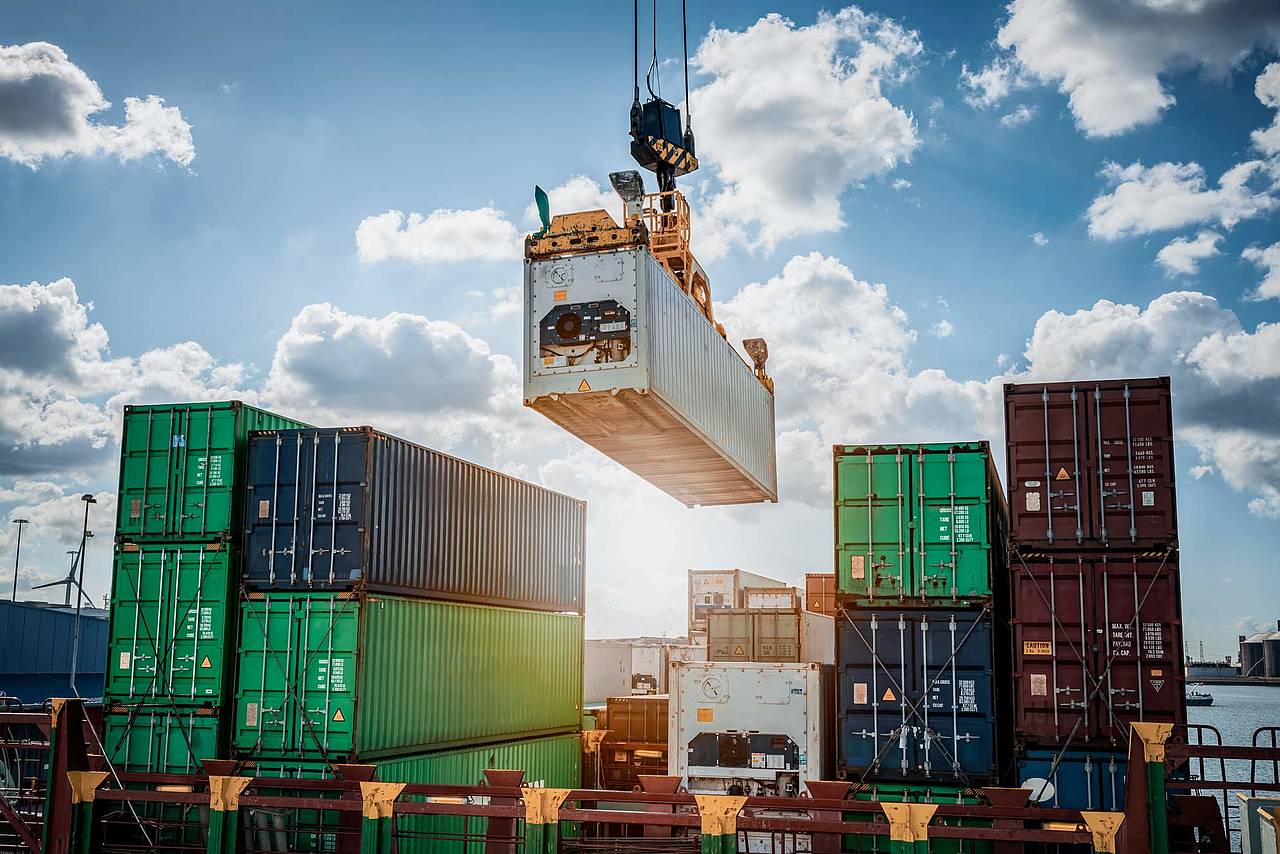 A QUESTION OF SIZE

Over the years the industry has also seen the emergence of global corporations that operate both ports and shipping companies in unison. It goes without saying that these ships prefer to dock at the company’s own terminals. Chinese companies are achieving particularly rapid growth in this area. According to state-owned corporation Cosco Shipping, it controls 297 berths in 37 ports, offering enough capacity for 114 million standard containers a year. The Greek port of Piraeus is part of Cosco’s portfolio, too. Of the world’s ten largest container ports, seven are located in China and three in other Asian cities. No longer can any European or US ports be found among the top ten (see chart).

THE LARGEST CONTAINER PORTS IN THE WORLD IN 2019

Seven of the ten largest ports in the world are located in China. They are listed according to the number of standard containers handled in a single year. This is measured using the standard international unit TEU, an acronym for twenty-foot equivalent unit.

The race for size and market position has also spread to ports in South America. The Argentinian government is concerned that the port of Buenos Aires is falling behind its competitors in Brazil and Uruguay, and so it announced a major development programme at the end of 2018. The plans included the construction of an external terminal, improved access routes and an increase in freight handling. Annual capacity is set to increase from the current level of 1.8 million standard containers to 2.7 million by 2030.

Container and mass-produced goods make up the majority of global trade, alongside commodities such as iron ore, liquid natural gas, coal and rock. The largest ore freighters are over 300 metres long and can carry loads weighing 400,000 tonnes. Port Hedland in Western Australia is home to the hugest bulk cargo port in the world. Large amounts of iron ore are mined in the surrounding region and shipped all over the world from numerous ports nearby.

Rotterdam is Europe’s most modern bulk cargo port, and also features fully automated loading and unloading. The port is operated by coal and iron ore company EMO, with one single person responsible for monitoring the 20 cranes. The benefit of automation does not lie in the increasing loading speed, the company says. It means that operators can respond to market fluctuations and a lack of qualified personnel with greater flexibility.

CONTROLLING VEHICLES AS IF BY MAGIC 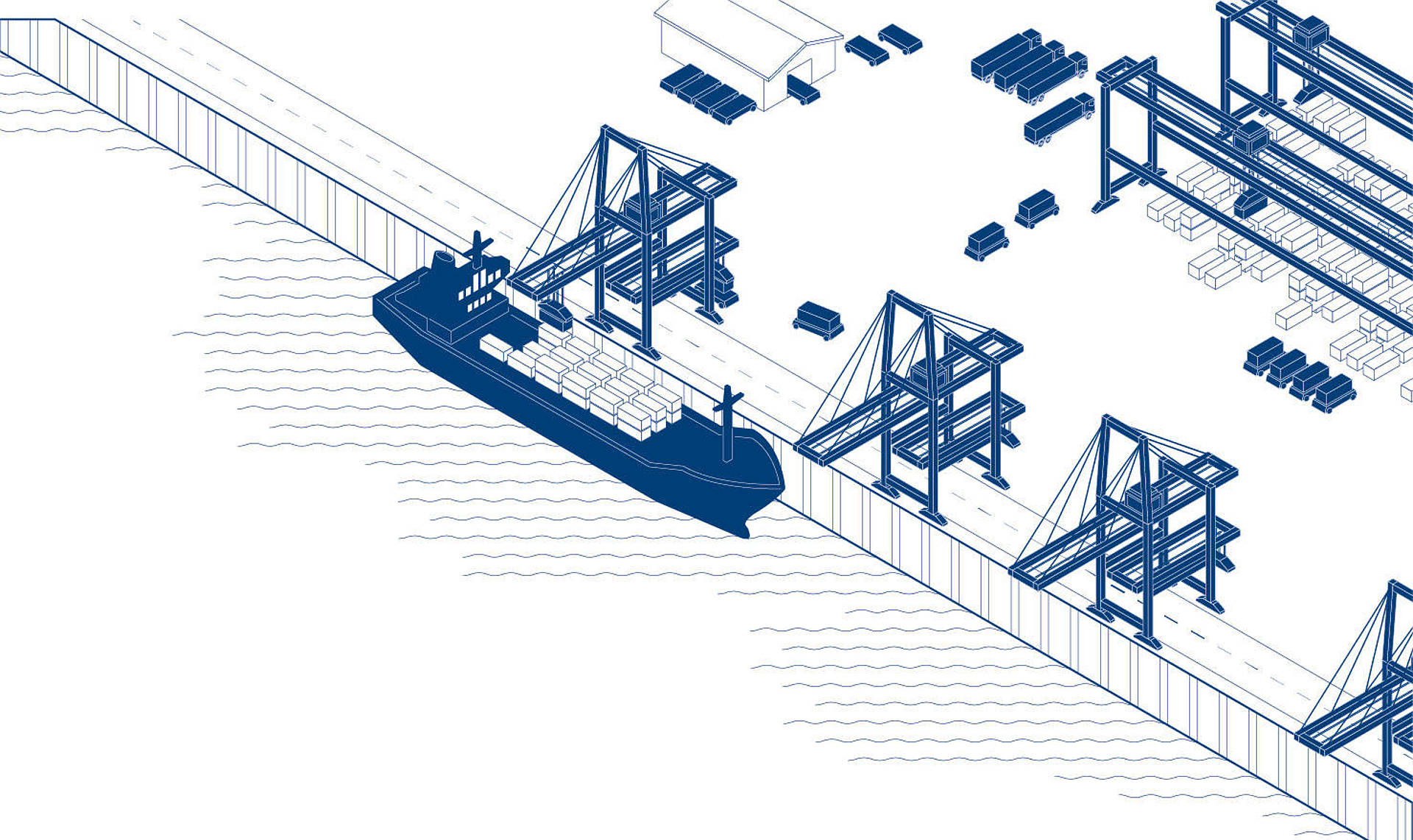 However, size and technical standards are not the only factors when it comes to competition – sustainability is also starting to play a vital role. Alternative propulsion is gaining in significance in the shipping industry. Electric cargo ships have already started docking in Rotterdam’s inland port. But ship batteries cannot be charged up simply by plugging them into the local power grid. They are the same size as a standard container and, instead of being recharged, overhead cranes replace the empty batteries with a new set. Modern ports are working hard to offer power supply infrastructure, something that will also benefit cruise ships requiring significant amounts of energy at the quayside.

Battery-powered motors are not practical for powering large commercial ships, as the necessary power storage systems would simply be too heavy. Deepwater vessels are therefore equipped with LNG-powered (liquid natural gas) generators in addition to the onboard batteries. LNG generates around 25 per cent fewer carbon emissions compared to the fuels used in combustion engines, but it can only be stored in its fluid form in a pressurized state. This means that LNG fuel stations have to fulfil high safety standards, which translates into increased costs. It is clear that the future continues to hold some challenges for deepwater terminal operators. 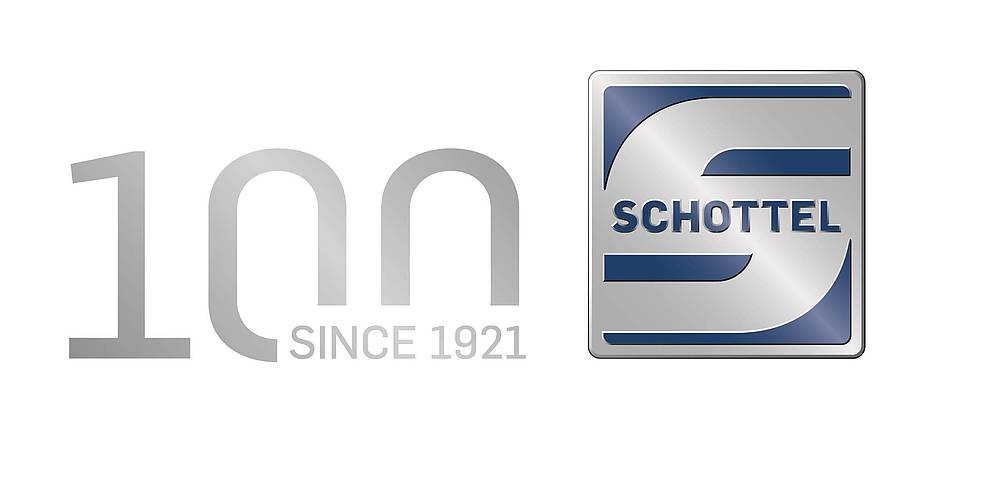 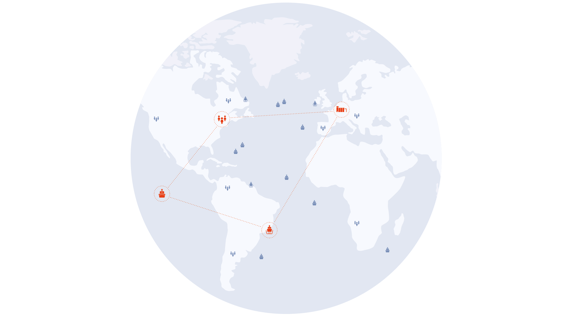 Taking service to the next level

Digital products and services open up numerous possibilities for optimizing ship operations—whether for tugs, ferries or offshore supply vessels. SCHOTTEL experts present new solutions and explain how operators can benefit from them in their daily work 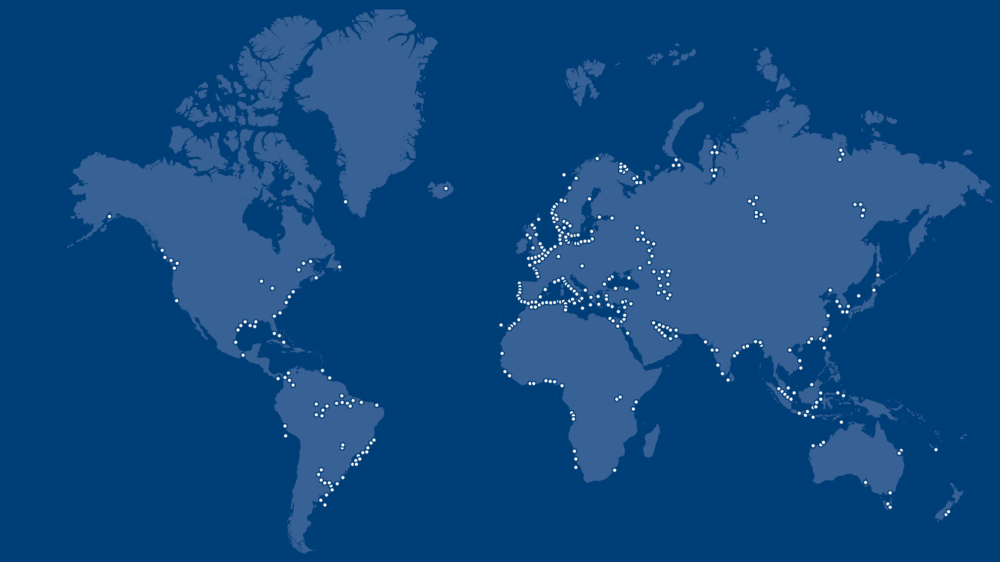 From Germany to the entire world

Whether azimuth thruster or controllable pitch propeller, main propulsion unit or manoeuvring aid, propulsion system or digital solution: SCHOTTEL products are used worldwide in vessels of all types and sizes. The world map locates the 500 vessels most recently equipped with SCHOTTEL propulsion units